Columbus is the capital city of Ohio and was founded in the early 1800s. The city’s geographical location is along the east bank of the Scioto River, just west of Downtown Columbus. In its early stages of being established, the city was mostly a farming community for there was limited access to most cities in the region. Over the years Columbus has developed and built a reputation as an industrial and commercial hub. This led to constructing a feeder canal and rail transport system, linking it to the biggest cities in the country and a major component of growth in the midwest.

The early Columbus region was home to many indigenous cultures, the majority of which were called the Moundbuilders. The three groups of Native Americas, the Adena, Hopewell, and the Fort Ancient people would create burial mounds for their lost loved ones, many of which still exist today and are evidence of the existence of these groups. Many of these mounds were built with clay which became the primary material for making bricks that we still use in construction today, including some famous city buildings like the Ohio statehouse.
Fast forward to the end of the 1600s until the mid-1700s, the region comprised Ohio was under the administration of the French colonial empire. Later on, in the 18th century, it was mainly occupied by European traders that primarily dealt with the sale of fur. 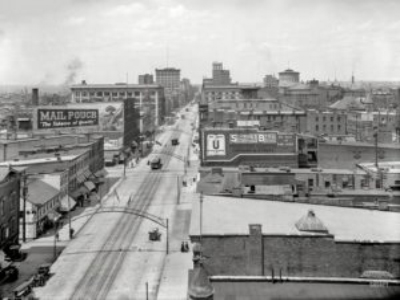 During the early periods of the 18th century, the Columbus region found itself in the middle of warring factions – the American Indians and the Europeans, both who wanted control. Battles went on during the French and Indian war, the Seven Years War, and eventually seeing the British Empire as victorious.
In the early 1800’s after the American Revolution, a surveyor name Lucas Sullivant founded a settlement just west of the Scioto river and as someone who followed Benjamin Franklin, named the village Franklinton after him. Unfortunately, many floods over the years have caused Franklinton to be wiped out and nicknamed “the bottoms” because it’s low elevation.
Columbus didn’t become an official city until 1812 and was named after the explorer Christopher Columbus, although history

shows he did not have any affiliation to the city and its unknown why it was named after him. Only a few years later, Columbus became Ohio’s state capital in 1816 after it moved from Chillicothe and Zanesville.

The first boom in population came from the completion of the Ohio and Erie Canal in the 1830’s as previously the city had no river connection to any other cities in Oho. Irish and Germans were the primary settlers, Irish settling to the north of what’s now Nationwide Boulevard while the Germans settled to the south that includes present day German Village, a very well-known part of town. In the 1860’s with help from the Morrill act, the Ohio Agricultural and Mechanical college was built which became The Ohio State University. The University later named one of the it’s largest student dormitories Morrill tower, after the act of which the university was founded. Not but a few years after the university, Columbus became a huge manufacturing hub because of the student talent that was attracted to the area. At one point Columbus became known as the “buggy capital of the world” thanks to a few companies who thrived during this time period.

How Columbus became known as the “Arch City”

In 1888, the Grand Army of the Republic, a veterans organization, held an annual convention inside Columbus that brought over 250,000 people into the city where most spent the nights in tents around town. For security, the city built wooden arches across High Street with gas lights to illuminate the area. These arches eventually became supports for electric street cars at the turn of the century but were removed for more efficient poles. The original arches were so popular and memorable that Columbus became known as the “Arch City” and they were later rebuilt for aesthetic and historical purposes in the early 2000’s in what’s known as the Short North, where the old arches once stood.

Columbus continued to thrive through both World Wars and even through Great Depression. The diversity of business within the city allowed for more stability and more economic activity versus Rust Belt cities that were heavily invested in one or related industries to manufacturing that declined during that time. Columbus has continued to grow and expand from a tiny farm town to one of the top 10 biggest cities in the US. Columbus is home to many Fortune 500 company headquarters as well as other major branches. Among them include Nationwide Insurance, Huntington Bank, American Electric Power, Cardinal Health, JP Morgan Chase, Big Lots, L Brands, and more. It’s also home to many food and beverage industry giants like Wendy’s, White Castle, Donatos Pizza, and Budweiser.