Cincinnati is a city in Hamilton County in the sourthern Ohio. It is the state’s largest metropolitan area and ranked the 30th largest in America. The city is only ranked behind Columbus and Cleveland in the list of the largest cities in Ohio. The prominence of Cincinnati as a city can’t be overlooked, considering its significant historical changes over the years.

Cincinnati and the Ohio River

The city of Cincinnati was founded in 1788 after it was settled on by Mathias Denman, Colonel Robert Patterson, and Israel Ludlow. It was initially called “Losantiville” and was renamed Cincinnati by St. Clair in honor of the Society of Cincinnati.

Trade, as in most cities in the region, was the main economic activity that increased the area’s urbanization rate. Trading activities were significantly enhanced by the use of steamboats on the Ohio River. The improved transport through the river, Cincy became famous for pork production, increasing exports of pork, pork products and hay was realized thanks to the enhanced processing.

Canals and Immigrating to Cincinnati 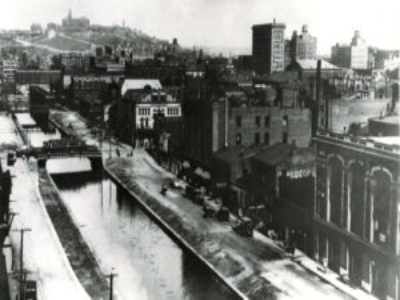 The incorporation of the city was not until March 1, 1819.
Further improvement of transport channels further opened up the city, improved the conditions that developed the commercial center. A huge boom came out of the construction of the Miami and Erie canals in 1825 and improving rail transport developed for commercial transportation attracted even more business into the area.
The industrialization history of the region was marked by a shortage of labor at a time when the city was growing at a fast pace. Employers found it difficult to hire sufficient work and until more people immigrated into the region, these shortages lasted. Most of those that immigrated and took those jobs were Irish and Germans who settled in town, of which became an entire neighborhood called “Over the Rhine,” a mostly German neighborhood named after the Rhine river in Germany.

As immigration continued, Cincinnati became one of the largest cities in the country. A famous newspaper article and a poet coined the terms “Queen City” or “Queen of the West”. Those terms have forever stuck with Cincinnati, leading its residents to nickname it the Queen City. 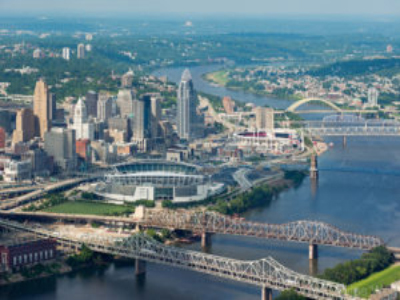 Fast forward to the latter half of the 20th century into the 21st, Cincinnati as one of the rustbelt cities known for its working class families went under huge changes. Cincinnati became a key player in the underground railroad as it was one of the first cities north of the “unofficial” extension of the Mason Dixon line which followed the Ohio river. This among accessibility discussed earlier is a continued reason the reasons Cincinnati has always been “a city of immigrants,” known for its diversity and hard working people.

Today, Cincinnati is known for many things. Diversity has allowed for its food and restaurant culture to thrive with choices from all over the world. Cincinnati has its own style of chili, Cincinnati Chili, known for it’s use of beans, onions, and more. There are prestigious universities such as Xavier and the University of Cincinnati both in the city limits as well as Miami University nearby, a short drive northwest about 30 minutes outside of town.
Cincinnati has a few of the biggest companies in the United States headquartered nearby such a Procter & Gamble, Fifth Third Bank, General Electric’s Global Operations Center, and Kroger, the city’s largest employer with over 20,000 employees.

The Cincinnati Reds were the first all-professional baseball team in Major League Baseball history back in 1869. The team had a tumultuous start after being kicked out of the previous “National League” of baseball teams for selling beer and playing on Sundays while they were “unwritten rules”. Also known as the Red Stocking for many years, the team has won 5 titles in 1919, 1940, 1975, 1976, and 1990. The 70’s teams were known as The Big Red Machine as the roster was stacked with future Hall-of-Famers who proved themselves by making 4 World Series and winning back-to-back championships.

The Bengals are the professional football team in town who merged into what became the NFL in 1970. They’ve won various divisional titles but never a Super Bowl championship. The team name actually came from the old team back in 1937 who were the Cincinnati Bengals, who were named after a rare white Bengal tiger from the Cincinnati Zoo, one of very few known to exist in history.

More recently, Cincinnati became home to FC Cincinnati, it’s first Major League Soccer team. The team had previously been a minor league team back in 2016 but with support from the city and the MLS adding more franchises, became an official professional team in 2019. There haven’t been any significant achievements yet in just a few years but the team looks promising going forward.